Skip to content
You are here:Home/Education/Can investing be learned?

Can investing be learned?

The secret of Turtle Traders’ success

Beginner investors often ask the more advanced: whether to achieve success you have to be born with qualities that will make you succeed, or investing can be learned by treating it like any skill. Every time we learn a new skill; be it cycling or writing, the first steps come to us with great difficulty. Then, with time, when we start practicing each subsequent move regularly, it comes to us more and more easily. After many, many hours we become proficient in what we learn, and the best teach the next generation, or this activity becomes our profession.

What does the concept of success in investing in financial markets mean for an ordinary person? Will it be getting an average annual rate of return of 50%, or will it be enough not to lose capital regularly and occasionally wait for the opportunity like a good hunter?

Why do so many people dealing with financial markets think that investing requires some magical, secret skill that only a few possess? Why do we not believe that investing can be learned?

It turned out that long time ago the same problem troubled two very well-known investors Richard Dennis and Bill Eckhardt, whose successes were appreciated in the environment of professional stock market players. In practice, they decided to check which part of the question; “Nature or knowledge?” is real. Richard believed that investing could be learned, Bill thought that to be a good investor you should have this “something” that is to be born with a palette of features that will allow you to regularly earn.

They decided to give an ad to the newspaper, choose a group of novice students, teach them the rules of investing and allow them to demonstrate skills using real money. They did so by posting announcements to well-known financial periodicals such as Barron`s, The Wall Street Journal and The New York Times.

It turned out that the response was impressive. Almost 1,000 people wanted to study investment with such masters as Dennis and Eckhardt, who were forced to make selections. Finally, they chose 13 lucky students who started their education. They trained for two weeks at the end of 1983. In January 1984 they started investing small amounts in real accounts to test their skills and feel the difference between theoretical investing, i.e. on paper, and investing real money, which is associated with such emotions as fear and greed. After a month, Dennis decided that the students he called “Turtles” were ready to invest larger amounts. At the beginning of February 1984, each of the “Turtles” got a management account with a sum of 500,000 to 2,000,000 USD of real money and their adventure in the world of really big money began.

“Turtles” turned out to be the most fascinating and most spectacular, successful real-time finance experiment. Over the next four years, “Turtles” achieved an average annual return of +80%, which was proudly noted by The Wall Street Journal.

According to the Turtle Rules, the most important features of a good investor are; trust, consistency and discipline. If the investor has these features, he is already close to success.

Richard made a hit because he showed that investing can be learned. Consistent compliance with simple rules combined with discipline and trust brings success on investment markets. This clear and legible message means that everyone can become a good investor and earn in the financial markets.

The great merit of Dennis and Eckhardt is also that they did not stop at merely announcing the success of their team “Turtles”, but also decided to share a set of rules that made it possible to make profits for all those who wanted to become familiar with them. This set of rules was called a mechanical investment system.

The complete investment system used by ‘Turtles’ consists of several very important elements, each with the same degree of importance. The task of a mechanical investment system is mainly to eliminate the emotions associated with investing, a set of strictly defined, simple rules allows you to accomplish this task.

The components of a complete investment system are:

It turned out that mechanical investment systems can be successfully used by investors. If you know that the investment system is profitable over a long period of time, it is easier to survive those moments when you experience a series of lossy transactions. It lets you be brave when you are full of fear and makes you cautious when you are too brave.

The example of “Turtles” is very clear – anyone can learn to invest. The key to success is knowledge and practice acquired over time.

Assumptions of the Investment System Components

Making transactions in the world’s most liquid financial markets.

Taking into account market volatility when deciding on the size of a position opened at a given moment.

Based on the risk-measured rate, a maximum loss of 2% on an open position.

In the era of developed technologies, systems that enable algorithmic trading such as Exeria help us maintain discipline and control our position. Exeria allows programming of automatic strategy signals without programming. We can build a turtle system here in 15 minutes. Bitcoin trading is very popular among new investors today. We tested a very simple solution – we buy Bitcoin when the price at the end of the day is the highest in the last 20 days and sell it when it is the lowest. The chart below shows the moments of buying and selling (green and red arrows) and the capital line, i.e. the value of our portfolio when applying this strategy.

In Exeria, we can easily test turtle systems on other instruments and run the algorithm on a real investment account and control it from any computer, tablet or phone. 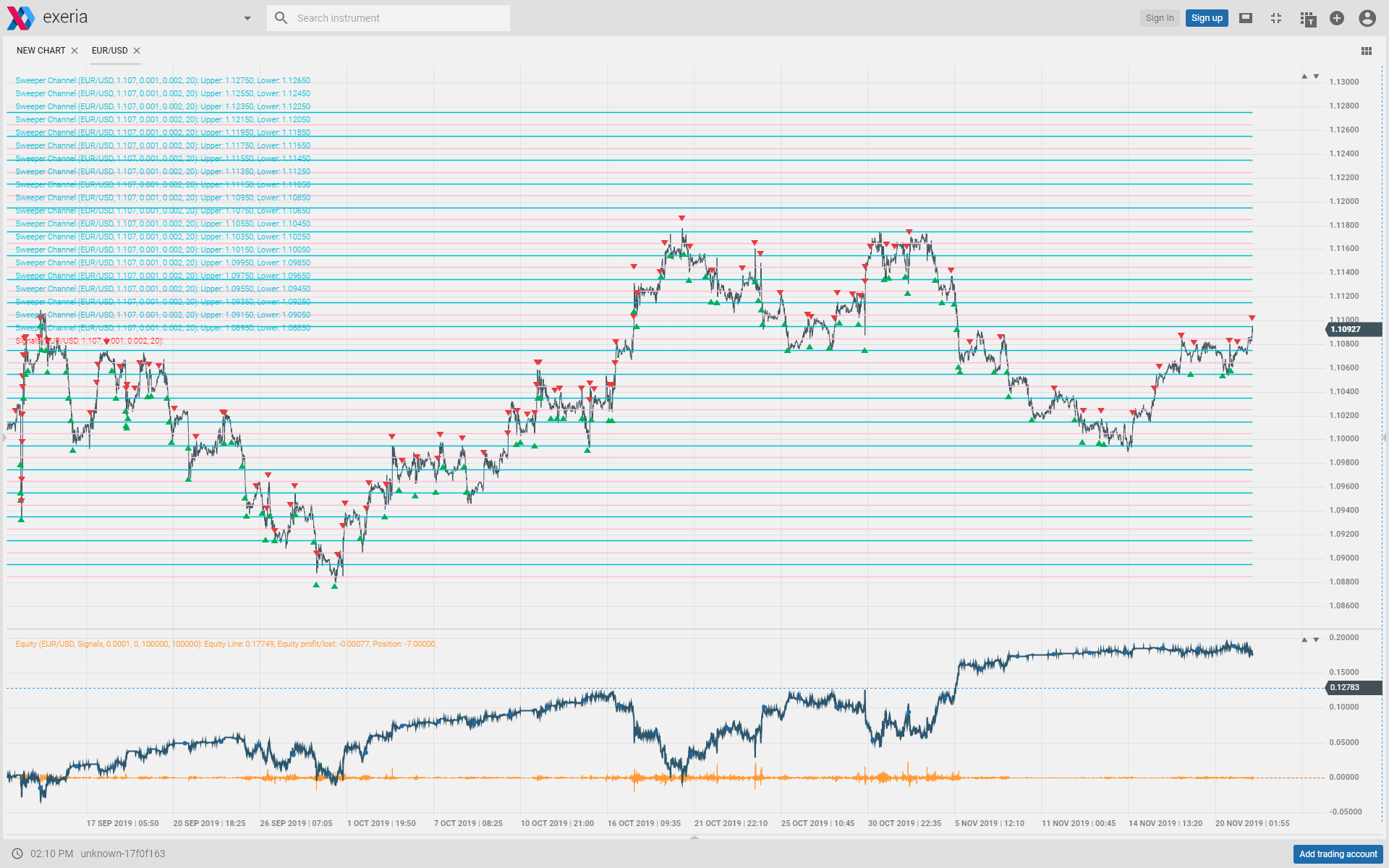