Skip to content
You are here:Home/Analysis and recommendations/2021. What to invest in?

A few ideas on what to invest in and how to make money in the stock market despite the crisis.

We said goodbye to 2020. It was very turbulent and volatile in the financial markets. The question arises: what to invest in in such a situation. In the name of fighting the pandemic, a gigantic amount of money was printed last year, with the dollar at the fore. This action was coordinated at the level of the largest central banks. The scale of reprinting is well illustrated by the chart below. It turns out that over the past year, 20% of the dollars that have been in circulation were created. 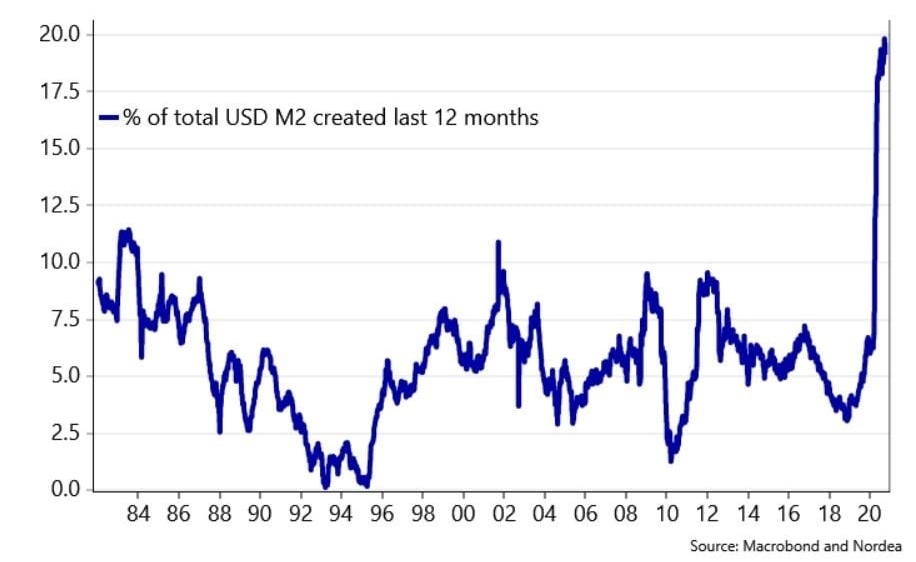 Interest rates are approaching zero. This excludes private investors from the market due to the offered profitability. Adjusted for real inflation, they guarantee losses. Capital is therefore directed to stocks, raw materials, precious metals, cryptocurrencies, real estate or other tangible assets.

Will inflation go up?

However, the gigantic increase in money supply has so far not triggered inflation, as one might intuitively expect. Nota bene, it was also not triggered by the dovish monetary policy of most central banks over the past decade. Why is this happening? Until now, financial markets have been the main beneficiaries of reprinting. Bonds systematically bought by central banks became more and more expensive, and their falling profitability encouraged a flight to other asset classes. This year, however, was unique in this respect. For the first time on such a scale, new funds also reached society in the form of various aid programs. However, the society instinctively limited its expenses, frightened by the rapidly deteriorating economic situation, and postponed the received benefits until the rainy day. In addition, there were also visible tendencies to reduce liabilities, i.e. the amount of previously repaid loans increased. As a result of such behavior, the pace of circulation of money in circulation decreased sharply. However, if we look at the chart below, the pace has been going down for two decades. The closing of the economies only accelerated this process.

For many weeks, however, it has been seen that the markets have practically ceased to care about the pandemic. The change of approach came when the largest pharmaceutical companies began to produce vaccines. If the process of their distribution goes smoothly in the near future and we do not hear about the occurrence of spectacular side effects (which could stop the entire process of mass vaccination), the mood in society trying to return to normal will also start to improve. And this is the key element of our investment puzzle, because it should translate into stimulating the circulation of money. On the other hand, we should remember that currencies will not magically disappear from circulation, and if we add the improvement of money circulation, we have a recipe for a rapid increase in inflation.

What to invest in, i.e. which assets will benefit from rising inflation?

Commodities will primarily benefit from rising inflation. Their reaction has already been partially visible in the past weeks, especially in terms of energy and industrial resources. First of all, let’s pay attention to how the commodity market compares with the stock market. 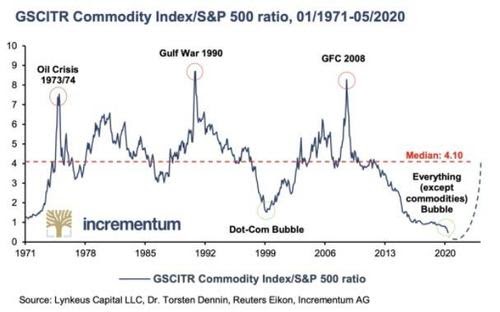 Commodities have not been so cheap in relation to stocks for several decades. If we add the prospect of rising inflation to this, which is what commodities benefit from, we get a pretty good entry point in the long run.

Copper to watch, will it go up yet?

Among the metals of an industrial nature, copper may attract attention, which has had a strong rebound in recent months. Obviously, engaging in this market at the current levels carries a lot of risk, due to the possibility of a correction. But if it does show up, it could be a very interesting market. I would certainly be watching the 300 ¢ / lb level closely as a place to potentially look for a buy signal.

Chart. Copper CFD in City Index – Copper. The margin for one contract is approximately $ 720.

In addition to investing in copper itself (e.g. in CFDs), we can also earn on the change in the price of this metal by investing in companies that mine it. The share prices of these companies change more dynamically than the prices of copper. Additionally, it is possible to invest in a fund grouping shares of many such companies, for example ETF Global X Copper Miners. In this case, I would pay attention to the level of $ 23 in the case of a correction.

Chart. CFD on Global X Copper Miners in City Index. The margin for one contract is approximately $ 320.

Platinum is just changing direction, it looks like it will wake up for good.

It is also definitely worth taking a closer look at the platinum market, which looks very interesting in the long term and can be an interesting answer to the question of what to invest in. Here the direction is just beginning to change to an upward trend. In this case, the risk of deep decline is not high.

Chart. Platinum CFD at City Index. The margin for one contract is approximately $ 110.

Investments in platinum – planned for a shorter period, can of course be implemented through CFDs. In the case of a longer time horizon, ETFs fully secured with metal are available on the market (e.g. Aberdeen Standard Physical Platinum Shares).

Forgotten Uranium, is it worth investing in it and will it start to profit from the return to the atom?

The uranium market has experienced significant declines in recent years. From the peak of the last commodity bull market to the 2016 trough, it fell by approx. 86%. At the current price, we are 77% below the peak. The sentiment towards uranium turned negative, especially after the fateful disaster of the Fukushima power plant in 2011. It was after that that another downward wave began. It is worth noting, however, that recent years have brought stabilization here. Very strong price drops in recent years have discouraged short-term speculators from entering this market, and platinum is in the hands of long-term investors.

The uranium market has experienced significant declines in recent years. From the peak of the last commodity bull market to the 2016 trough, it fell by approx. 86%. At the current price, we are 77% below the peak. The sentiment towards uranium turned negative, especially after the fateful disaster of the Fukushima power plant in 2011. It was after that that another downward wave began. It is worth noting, however, that recent years have brought stabilization here. Very strong price drops in recent years have discouraged short-term speculators from entering this market, and platinum is in the hands of long-term investors.

How to invest in uranium?

The beneficiaries of uranium prices recovery in the coming years will be its producers, such as Cameco, Energy Fuels and Kazatomprom. You can also look at ETFs grouping of uranium-related companies, such as Global X Uranium, or the North Shore Global Uranium Mining launched a year ago. The potential for growth is quite well illustrated by the Global X Uranium chart below, which shows a changing direction in the long term. Investors with a slightly higher risk appetite can also benefit from CFDs on this ETF.

Chart. CFD on Global X Uranium in City Index. The margin for one contract is approximately $ 280.

Gold and silver are a way to make a good investment.

Precious metals are generally considered a hedge against inflation. In part, it is somewhat correct, but the main factor influencing the perception of precious metals by investors is real interest rates, thus including inflation. At the beginning, we mentioned how the debt market was destroyed by the current policy of central banks. Many capital holders have a problem today. They are unable to store their purchasing power in bonds or traditional deposits. We operate in an environment of relatively low inflation, due to the aforementioned decline in the pace of money circulation. However, when this circulation starts to revive and inflation starts to rise, central banks will have a huge problem, as it will be difficult to painlessly raise interest rates at the current scale of debt. Keeping rates at current levels amid rising inflation will cause real interest rates to fall even further, which in turn will further trigger capital flows towards precious metals.

Silver and gold, a long-lasting and harmonious relationship, promising for the future.

Gold and silver fared very well in the end of the year. Due to the monetary policy pursued by central banks, their prospects remain promising. There are many ways to invest in gold and silver. Short-term investors, focused only on catching individual swings, can use, for example, CFDs. On the other hand, anyone who wants to bind gold and silver for a little longer, should build their exposure by purchasing physical gold (e.g. 1-ounce coins) or ETFs fully secured with metal in physical form. We can also make money on the change in the price of gold and silver by investing in companies mining them. Changes in the share prices of these companies are characterized by a greater dynamics of price changes than the metals themselves, and you know, there is always a chance for what we like …

Gold on the chart

The nature of the last bull market in 2000-2011, which was divided more or less in the middle by a correction, can draw attention in the gold chart below. A correction that is similar in size to the current one. Therefore, if the pattern were to be repeated, the gold market should generate another, very strong wave of growth from the current neighborhood.

Chart. Gold CFDs on the City Index. The margin for one Gold Mini contract is approximately $ 90.

How will silver fall on it?

Silver also looks promising, currently lagging behind gold. Since it is also a metal with industrial properties, it can be assumed that it will be also benefited by rising inflation. Silver will build strength in maintaining negative interest rates, so it will catch up with gold with a vengeance. This year’s break changed a lot. Eventually, the market broke out of the several-year accumulation zone. Since August, it has been undergoing a correction, which in terms of size is not too deep and only positively reflects the possibilities of demand.

How to invest in gold and silver?

In terms of the range of available options, the situation is similar in the case of gold and silver. Investors with shorter horizons can use CFDs. Those wishing to maintain exposure over the longer term should consider purchasing silver in physical form, ETFs fully backed by metal or slightly more volatile mining companies, the entire range of which can be found on accounts with the City Index.

Chart. CFD on ETFS Physical Silver at City Index. The margin for one contract is approximately $ 5.

If you want to learn more about what to invest in this year, see here and see how to do it with the help of robots.