Skip to content
You are here:Home/Education/How to make money with Bitcoin

How to make money with Bitcoin

Why is Bitcoin Investment becoming more and more popular? Do you want to get it?

In 2020, Bitcoin grew by 209%. In the face of a crisis and the mass reprint of traditional money, Bitcoin appears to be a safe haven. You are just entering the world of cryptocurrencies and want to find out which method to choose and how to make money with Bitcoin? Your choice will depend on a number of factors, such as your technical knowledge, investment experience, and risk appetite. Here is a guide.

Find out how you can earn up to 200% on cryptocurrencies per year.

The newest way to store a treasure in a sock – buying Bitcoins.

You can earn money with Bitcoin in many ways, and buying and storing Bitcoin is one of the easiest. Most people nowadays view Bitcoin as an investment or store of value – much like gold. You can invest in Bitcoin by buying and holding a cryptocurrency in the hope that its value will increase over time. You just buy a currency and hold it in hopes for the price to rise. In the crypto language, you become the so-called “Holder” – you buy currency to store it. Bitcoin is extremely volatile and high-risk, but increases in its rate can appeal to the imagination. In December 2015, Bitcoin cost USD 0.4 thousand, today it is almost PLN 38 thousand (January 2021). So we are talking here about a huge 1000% return in 5 years !!!!

Purchasing cryptocurrency is now easier than it was a few years ago. You can become the owner of digital money after just a few minutes on the Internet. You also have at your disposal stationary Bitcoin exchange offices. Investing in Bitcoin is therefore easily accessible to most of us. I write more about it later in the article.

As an entrepreneur, you can earn USD 7,000 on Bitcoin per year.

The first popular way to earn money with Bitcoin is through Bitcoin mining. The mining is done by high-powered computers that solve complex mathematical problems. In the early days of Bitcoin, you could earn significant amounts of money from mining with limited spending. Today, however, it is very complicated, requiring hardware with high computing power and significant expenditure on electricity. At the moment, we can buy a Bitcoin miner for around USD 6,000. and it pays for itself in approximately 18 months. Pretty good – right? However, we can assume with high probability that Bitcoin mining will not be easy and simple for you. So are there any alternatives?

Are you ready to start trading and making money with Bitcoin?

Trading Bitcoin is even more risky than investing in Bitcoin, but it can be very profitable and the returns are spectacular. Basically your focus is on buying cryptocurrencies but taking advantage of their volatility. This makes you earn significantly more than just holding cryptocurrencies. The idea is to buy Bitcoin at a low price and then sell it at a more expensive one, thus collecting profits. Some people decide to run robots that automatically trade Bitcoin for this task. The robots invest according to the tested plan and make trades when preferred. They minimize human error, eliminate emotion-based decisions, and control the market even when we sleep or travel. It’s an interesting way to make money with Bitcoin for both new and experienced investors. 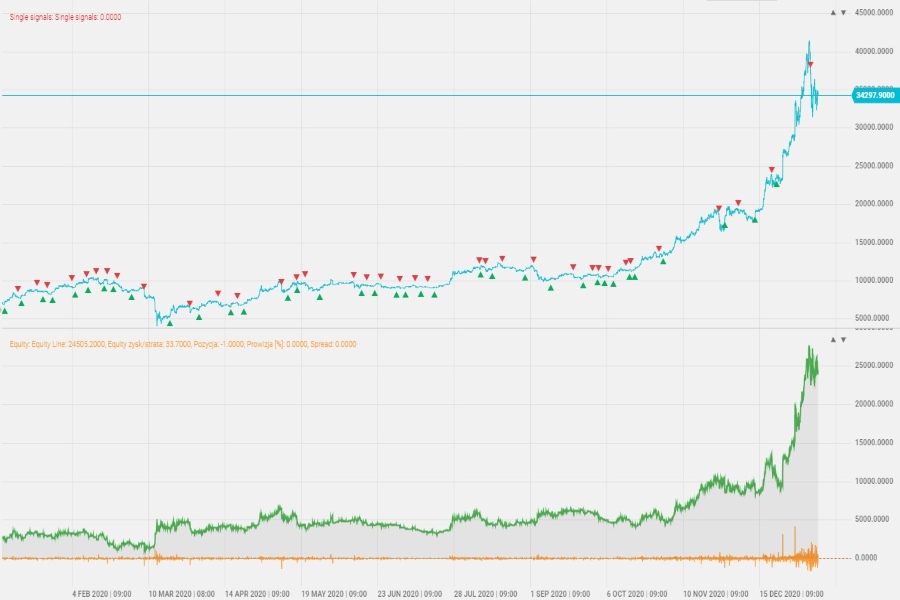 How to earn money by lending Bitcoin

We buy Bitcoin. What needs to be done?

Bitcoin is not a physical banknote, coin, or even a record in our bank account. In simple terms, we can say that Bitcoin is a number. A very long number, but you can even write it on a piece of paper. Knowing this number, you have access to your digital wallet in which you can keep a fraction of your Bitcoins or many of them. Theoretically, you can write this number on a piece of paper and pass it on to someone else. In practice, electronic systems take care of it, and the buyer of your Bitcoin gets his number after buying it. This number is called a wallet or an address. Popular websites that run electronic wallets for their users include Blockchain.com, Exodus, Electrum or Mycelium. It’s free to open multiple wallets. You pay the minimum fee to transfer your Bitcoin to or from your wallet. Access to your wallet will be provided by a computer, tablet or phone. If you invest significant amounts in cryptocurrencies and want to limit the risk of your address leakage, you can think about a hardware wallet, i.e. a hard disk where you save your address, disconnect from the Internet and put it in a safe place.

Bitcoin is accused of anonymity and lack of transparency, understood as knowing who owns it and why it is being transferred. On the other hand, this anonymity is an asset for many people who disagree with the growing control of our lives. Bitcoin is based on Blockchain technology. We can imagine it as a huge public database that everyone can access and confirm the transaction. We don’t know the names of people or organizations that buy and sell Bitcoin, only a random string of characters. This lack of control keeps rulers awake at overseeing transactions and the flow of money. Regulatory threats presently pose a serious risk that could harm Bitcoin in the future.

Can I buy stuff with Bitcoin?

Of course. You can pay with Bitcoin in some shops and restaurants. Bitcoin as a means of payment has risen in popularity this year when PayPal Holdings Inc. announced in October that it would allow customers to use it and other virtual currencies to make purchases from 26 million retailers on its network.

How to buy, sell and make money with Bitcoin? First, buy Bitcoin.

If you are not involved in mining Bitcoin, you have to buy it somewhere with traditional currency. There are many places on the web where you can buy Bitcoin online. We chose Binance. It is currently the largest cryptocurrency exchange in the world. The group of well-known large exchanges also includes Coinbase, OKEx, Kraken and Bittrex. Registration took us a few minutes. We made a credit card transfer for $ 250 and we could enjoy a fraction of Bitcoin on our account. Bitcoin can be broken down to eight decimal places. So if we bought a cryptocurrency worth $ 100, when it was traded for $ 20,000, we would get 0.005 Bitcoin. On the crypto exchange’s website you will find simple tools to manage your account similar to those provided by traditional brokerage houses and banks. So we see charts with quotes, forms for placing orders, information about the account balance and transactions made. We decided to use Binance through the SkyRocket platform, which allows you to manage accounts on various exchanges in one place, including our account on Binance. Registration took a few minutes. After logging in, we got access to really interesting tools, including charts and automatic bots that facilitate investing. Our first transaction is buying Ethereum for Bitcoin. Bitcoin is the world’s most famous digital currency, but not the only one. In recent years, a lot of new cryptocurrencies have appeared – Ethereum, Ripple, Tether. We can exchange them just like Bitcoin for traditional currencies and also exchange, for example, Bitcoin for Ethereum or vice versa. About the further fate of our adventure with trading cryptocurrencies and Bots on SkyRocket and what are our results – more soon.

Investor and billionaire Mike Novogratz said he was seeing “lots of new buyers” with a “small supply” of Bitcoin. Indeed, the value of the entire Bitcoin market can be compared to that of one large company like Apple or Tesla. Young investors who are ready to invest small amounts of money for up to 25-30 years are particularly passionate about digital values. Cryptocurrencies are becoming part of the investments of famous celebrities and investors, although their share usually does not exceed a few percent of the portfolio value.

Bitcoin prices are very volatile. It is true. However, let us compare them with the currencies of countries where inflation is raging. For Americans or Europeans, the salary they received in the morning has almost the same value in the afternoon. It’s not so obvious to South Americans. If we add to this restriction on the purchase of the dollar or euro, electronic and easily available Bitcoin will turn out to be a salvation and protection against galloping inflation.

Can you invest in Bitcoin with a fund?

In August, Fidelity announced the launch of its first Bitcoin mutual fund. Fidelity Digital Assets will manage the fund with a minimum investment of $ 100,000. It is therefore an investment beyond the reach of most investors, especially if it were to constitute only a small percentage of the portfolio.

In order to earn from changes in Bitcoin prices, we do not have to buy cryptocurrencies or open accounts on cryptocurrency exchanges. The growing popularity of Bitcoin meant that traditional, licensed brokerage houses introduced it to their offer. There we can trade CFDs on Bitcoin or Ethereum, the price of which is based on the price of the cryptocurrency. This is one of the easiest ways. Although we will not have a digital wallet and real Bitcoin, we will also avoid the risks of investing on new exchanges. An example of a brokerage house that offers cryptocurrencies is City Index. In addition to traditional investments in gold, silver, stocks, indices, currencies and commodities, we can also have cryptocurrencies in our account.

Summarizing, cryptocurrencies are a young, dynamically developing segment of investments whose popularity is constantly growing. The ease of carrying, buying and selling makes them more and more useful in electronic settlements. The anonymity of cryptocurrencies worries governments, and attracts the gray economy. However, it is a market where many investors see a great opportunity and despite huge price volatility, they are ready to invest part of their portfolio in cryptocurrencies. Are you interested in how to make money with Bitcoin? Contact us – exeria@exeria.com