Skip to content
You are here:Home/Education/How algorithms change investing

Processors, memory, resources, algorithms, codes and many other similar topics are becoming more and more popular in more and more areas of our lives. Automation, computer science and robotics sometimes revolutionary and sometimes imperceptibly appear in areas where they were not expected some time ago. Technical civilization is constantly gaining new footholds, and after some time it will take over an area that was recently considered virgin. Now algorithms and programs support driving safety, control the climate at home, but also brew coffee, or monitor bodily functions during something as old as the hills as running.

New masses of IT specialists seem to have employment for many years, because this wave of digitization of life is still progressing and needs support. This in part is the answer to the question of where in all this man appears. For if subsequent areas of human life and activity begin to be entwined with monitoring and decisions based on algorithms, there is a fear that man will slowly run out of space. In fact, you no longer need a great barista to brew coffee, because an automatic machine will do it for us, which will not only control the brewing process, but will also brew coffee that has just been milled without undue delay, thanks to which the taste and aroma will be particularly rich. And all this from the comfort of home.

Digitization also does not bypass the investment industry. In the 1980s, when the personal computer became an increasingly common tool, the era of shifting an increasing number of activities that until now were performed by people to overheating processors began. Data collection, aggregation, presentation, and later searching and attempts to find regularities that would have the potential to support profitable transactions on financial markets. With time, new solutions in the field of programming were worked out, the effectiveness of code and the speed of information flow were analyzed. We are currently dealing with a global race for ordering speed. Not only the parameters of the computing servers began to count, but something as seemingly prosaic as the length of the cable connecting that server to the servers of the exchange on which the orders were placed.

This technology race has led to markets having changed dramatically over the past 30 years. While in the 80s people’s telephone orders were still dominating and this type of transaction generated the majority of turnover, now in most developed markets the main players are computers. One should be aware that by observing price changes, we observe something that does not include a human decision-making factor the way it used to.

Does this mean that we are entering a world in which events in financial markets will be triggered only by computers, so indirectly our future will depend on what these computers think? Where is the place for man here? What should a novice speculator do when he is aware that he is entering the market driven by thousands of algorithms enforced by machines with enormous computational capabilities responding to events in less time than the one that allows the investor to notice the event at all.

The impression may seem depressing, but it is comforting that it is not real. Even a novice student of the art of speculation on the market is not doomed to fail against computers, and even can benefit from this trading technology.

The art of speculation – something that was once shrouded in mystery. Something that market investors dreamed of. The ability to control the plan and its execution. Is this a relic of the past? Not at all. Still in the era of algorithic rivalry on the market, the human factor remains the main playmaker. Although now it is rather “rear-wheel steering”, hence it may not be visible at first glance. Behind the algorithms and thousands of lines of code are people, or rather entire teams of people. In the front you can see the algorithm and the orders it spits out, but its form is the result of human thought. It’s always a human concept and his knowledge, inventiveness and intuition are behind the fact that a given algorithm looks like this, and it behaves in a certain way. Yes, thanks to computers, tasks are carried out faster, but the lumberjack also thanks to the power of saw cuts the tree faster, although it is up to him to decide which tree is suitable for cutting.

The human factor will not disappear, because full entrustment to algorithms is not advisable, as demonstrated by events from the past, such as the bankruptcy of LTCM or Amarath Advisors funds. Thus, at the level of control, man will still have to be present.

Computers don’t think. They blindly do what they were instructed to do and in the way they were shown. So it depends on the man what algorithm to choose and how it should work. Thanks to this, the role of man boils down to conceptual work and possibly later control work. But thanks to computers a man can resign from repetitive, tedious, aggravating or uncomfortable tasks.

As a result, we have programs that support the building and testing of algorithms. Thanks to them, the user can code any activity on a transaction system. Specify when to open the position and when to close. How big it should be. However, the problem is that creating algorithms to implement them later requires advanced programming knowledge from the user. So a market enthusiast who is a doctor by profession must suddenly become a programmer. Acquire knowledge and skills that are to others what knowledge of human anatomy and processes occurring in the human body is for him. In a sense, get a new profession. For many, this is an insurmountable threshold.

Fortunately, this problem is becoming a thing of the past. The technology created by the Polish company under the name Exeria means that the user can independently build advanced transaction systems without even minimal programming or code writing skills. The algorithm created in a simple way is easily and quickly testable. The user can check its results and capital line. Thanks to this, the investor is equipped with tools that allow taking advantage of this technological revolution on financial markets.

Therefore, the question arises whether the fact that most of the turnover is generated by computers does not mean that the investor is forced to build algorithms with a complicated structure, because there is a risk that the simpler ones have little chance of success? 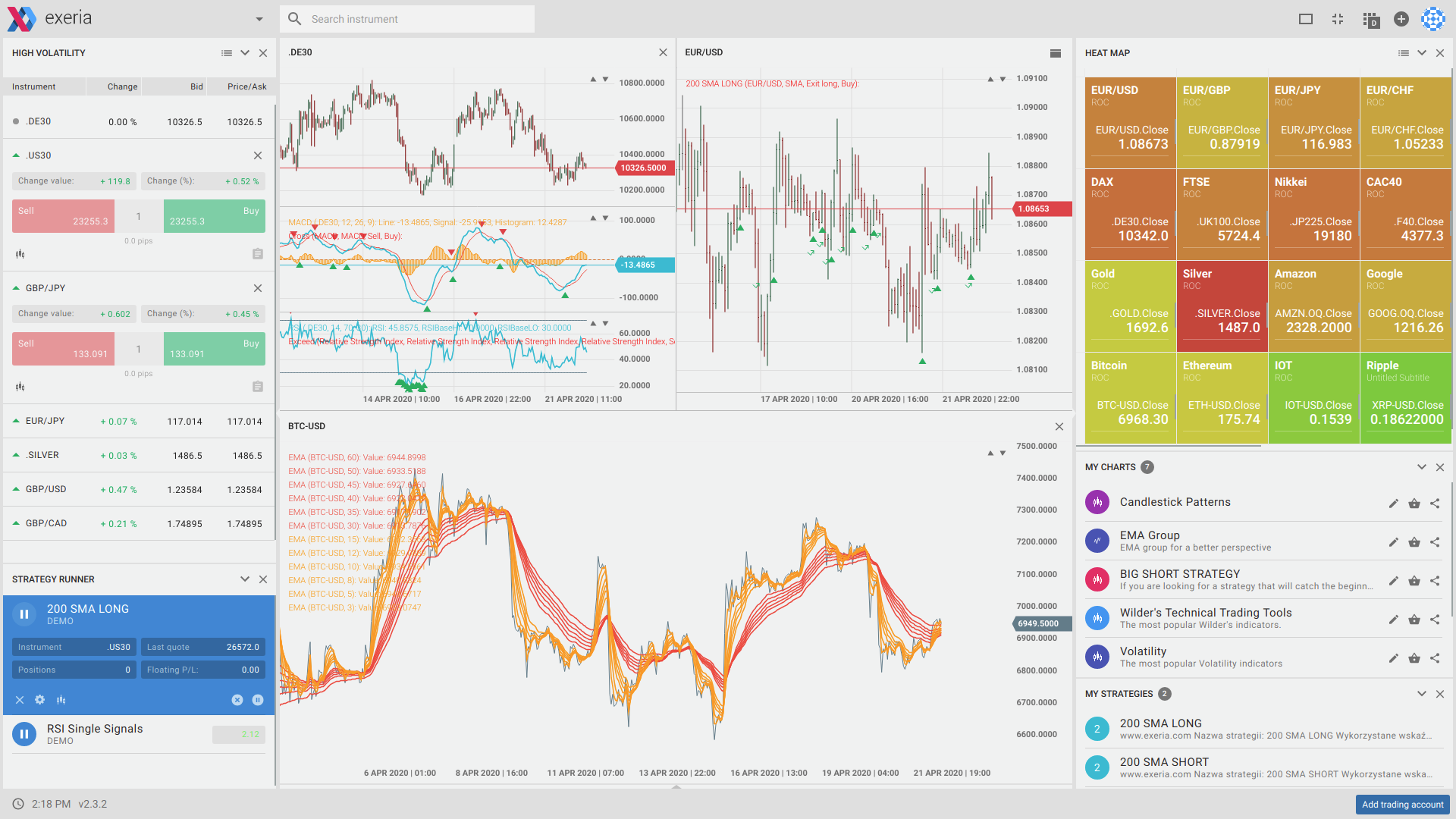 The figure above presents the Exeria website, which is used for the intuitive construction of investment robots and their testing. It is intended for investors who want to enter the world of automated trade in the markets and do not have programming knowledge, which in this case is not necessary.

It turns out that even simple mechanical solutions are still valid. An example would be the channel breakout system known for many years. It involves making transactions when the market reaches extreme values over a given period of time. The signal for a long position will appear when the price reaches a maximum of e.g. the last 20 periods, and a short one when it reaches the minimum of the last 10 periods. The size of the time windows can be equal, but it can be different. This type of mechanical strategy was popularized for commodity markets by a group of traders who were called Turtles. This system on a daily scale worked well on commodity markets due to the long and stable trends that appear on these markets, and it is in such conditions that this system manages best. Below, we tested the turtle system on Bitcoin and the bottom green graph indicates the capital line, i.e. the value of our portfolio. 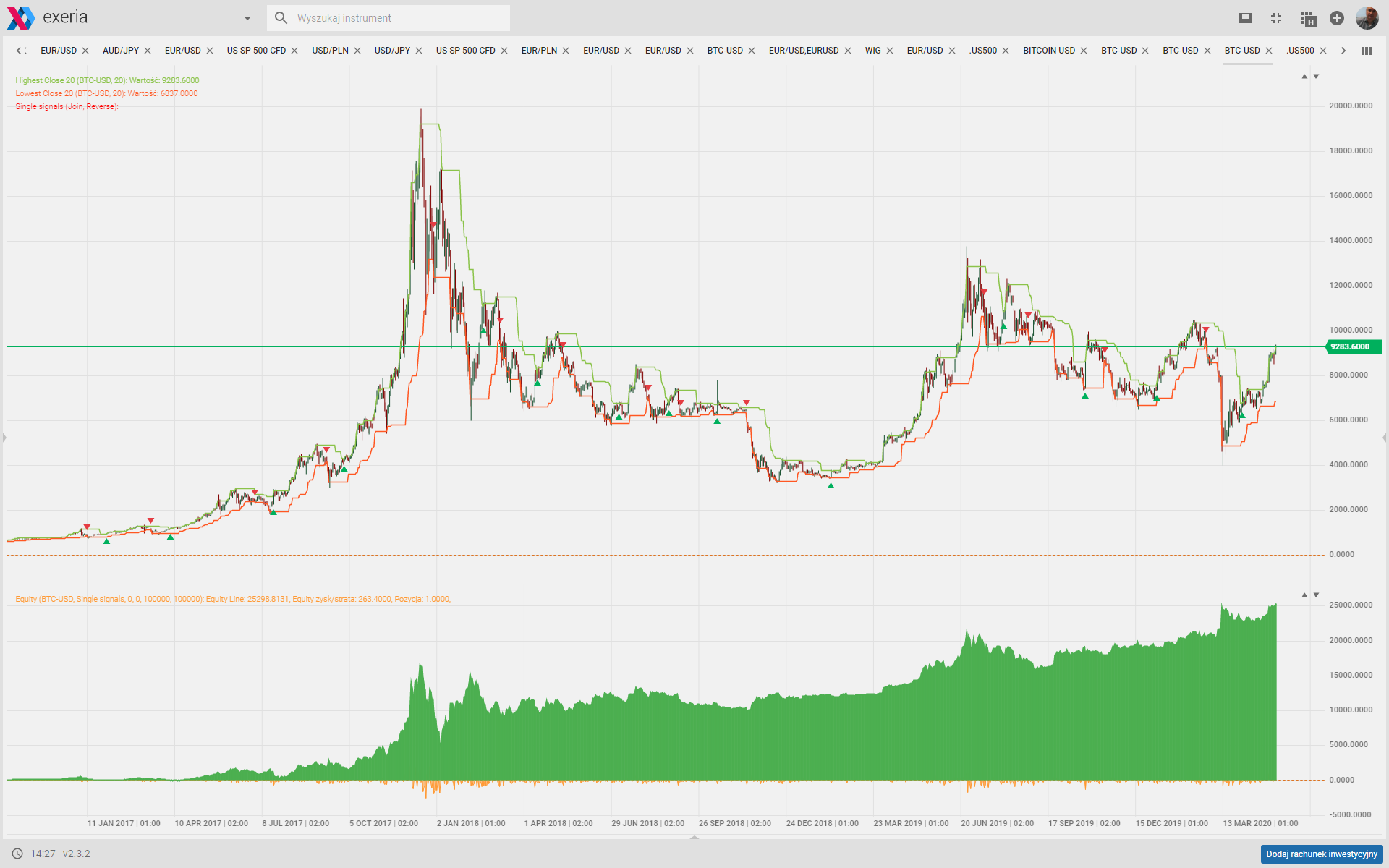 You have to be aware of the fact that there is no algorithm in the world that will cope in all market conditions. In short, some systems are effective in periods of clear trends, and others in periods of market consolidation. The weaker behavior of the channel breakout when trends were lacking was one of the reasons for the depreciation of this system by those who suggested that better results would be achieved by following the signals of this system, but in the opposite direction and ironically called this new approach “turtle soup” .

In reality, it is not possible to constantly achieve positive results based on one system. Hence the tendency to use several systems with different characteristics at the same time. The systems portfolio has a chance to give a more stable summary result. Independent execution of orders from many systems on many markets at the same time would be impossible for a single person, but that’s what we have computers for. 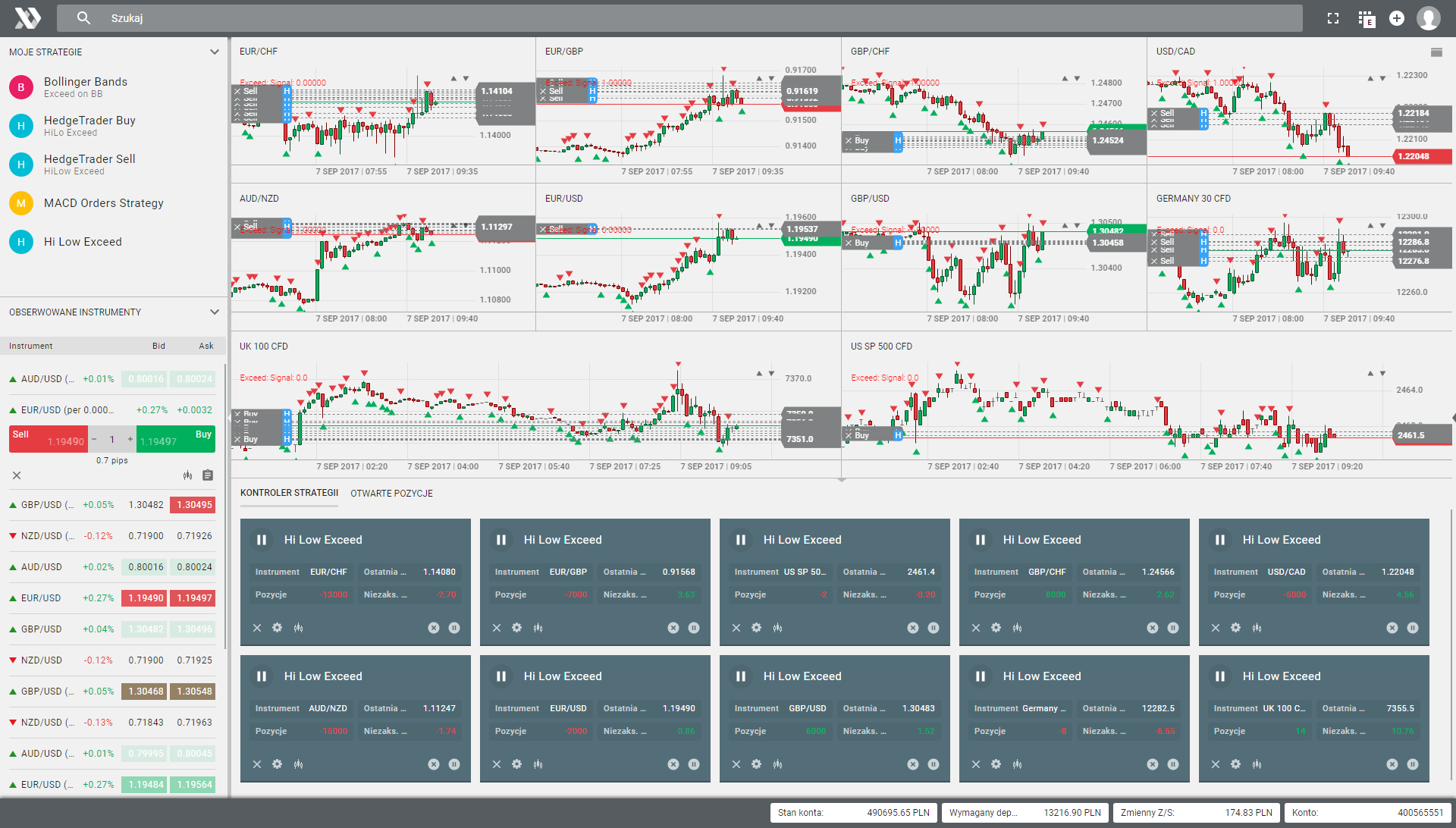 Progressive technologization is not a wave of danger for man, but a change in the conditions of his functioning and the location of human possibilities. Exeria provides everyone with a service that allows to build algorithms that can later be implemented on the market without specialist programming knowledge. The level of complexity of the algorithm and the number of orders placed is the user’s responsibility. He makes his choice, the computer does the rest. The role of man comes down to control and calibration as well as thinking about new possibilities offered by algorithms.