Skip to content
You are here:Home/Analysis and recommendations/The dollar moves to rebound

The dollar moves to rebound

Very little has happened in the dollar market for many weeks. It stuck in a side move, which was also preceded by a significant weakening of the USD from previous months, along with a rebound since March and an increase in risk appetite in the markets.

It is clearly visible on EUR/USD. After reaching 1.20, problems with the continuation of the strengthening began, while the market for many weeks was drawing a distribution pattern here, resembling a slightly stretched head and shoulders. Since yesterday, the dollar appreciation pressure has become so noticeable that it is possible to talk about an attempt to leave the bottom of the current volatility range on EUR/USD, which in turn opens the way for a further downward correction. The closest support on this daily scale is the area of 1.1485, where apart from the earlier peaks, we also find a cluster of 38.2% and 61.8% Fibo retracements from earlier upward swings.

The situation on the dollar index is also interesting, as it slowed down on the monthly chart at the level of long-term support, from which a strengthening correction is now initiated. As you can see, buyers in a monthly interval have a chance to work out a bullish engulfing pattern. If the movement is able to expand on this scale, the dollar index may move towards the level of 100, which is the upper limit of fluctuations in which it has been maintained over the past few years. 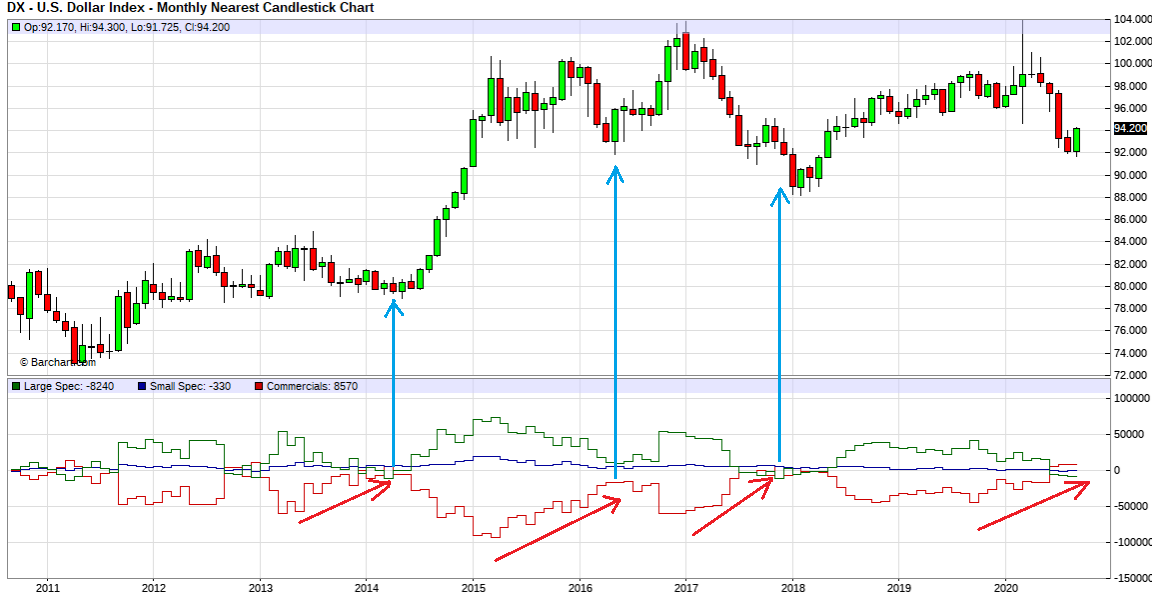 It is also worth bearing in mind how the key participants of the dollar futures market position themselves. The largest investment banks (Commercials) have been reducing their net short position for almost a year to move into net long position in the last three months, which is rarely the case historically. This usually well-informed group of market participants is clearly positioning themselves for a strengthening of the dollar, perhaps knowing something that other participants do not know. On the chart, I also marked a few cases from recent years showing what was happening to the dollar index as Commercials reduced their net short position. Usually, such a move was preceded by a larger strengthening of the dollar.