Skip to content
You are here:Home/Analysis and recommendations/Silver began to chase gold

In recent months, there has been a lot of interest in precious metals, especially gold. Investors usually look at gold in market uncertainty, which was very high in February and March. The demand turned out to be so high that the price of “paper” gold (derivatives) was moved away from the physical (also due to logistical problems / interrupted supply chains), of course in favor of the physical. Dealers’ margins began to reach tens of percent above the Comex price in many places.

In addition to risk aversion, the second factor favoring gold is the policy of central banks, which, as we know, have started solidarity in loosening monetary policy (lowering interest rates but above all increasing QE’s). The level of interest rates relative to real inflation is also very important. Currently, the standard is that real rates are negative in many places around the world, so money holders are not able to keep their value in standard deposits or bonds. Given the announcement of central bankers, seeking at all costs to devalue growing debt inflation, we can be sure that the environment of negative real interest rates will remain with us for a long time, and this creates a solid foundation for precious metals in the coming years (see the decade of the ‘ 70). 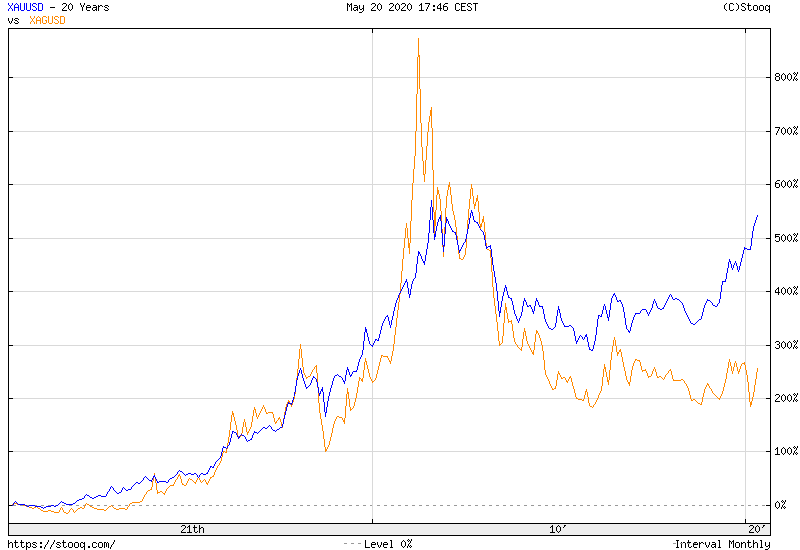 While gold has already seen a significant rise in prices over the past few quarters, silver should attract attention, as it is correlated in long term with gold, and as you can see in the chart above, it has considerable disproportions. Their appearance was argued that silver is partly an industrial metal due to its possible use. The expectation of an economic slowdown caused by the effects of the current pandemic has led to strong declines in many commodities. However, it should be remembered that commodities are doing very well during rising inflation, which is a scenario that seems to be the logical consequence of maintaining real negative interest rates by central banks.

The currently visible decline in inflation is temporary. It should be remembered that inflation depends on both the money supply and the pace of its circulation. Due to global lockdown, it was the latter element that caused inflation to lose dynamics. However, when the economy is completely resumed and the money supply remains at its current level, inflation should noticeably accelerate, increasing the flight from cash to tangible assets, including precious metals and commodities. Silver in this environment will get a strong, positive stimulus. 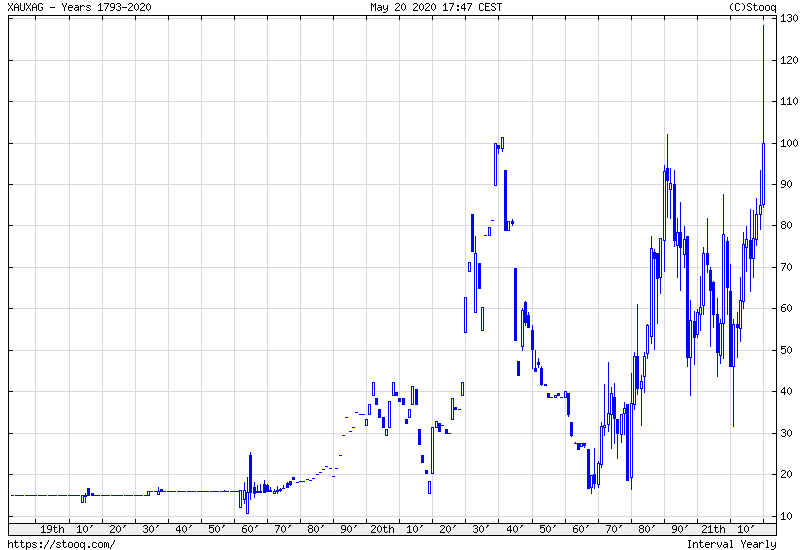 The recent divergence of silver and gold prices is also well illustrated by the relative strength chart, which at one point fired to historically high levels under 130 silver units per gold unit. Over the past few decades, this indicator fluctuated in the range of about 40-100. It can, therefore, be assumed that it will ultimately target at least the average of 60-70 XAU / XAG. The price of silver can, therefore, increase much faster than gold. 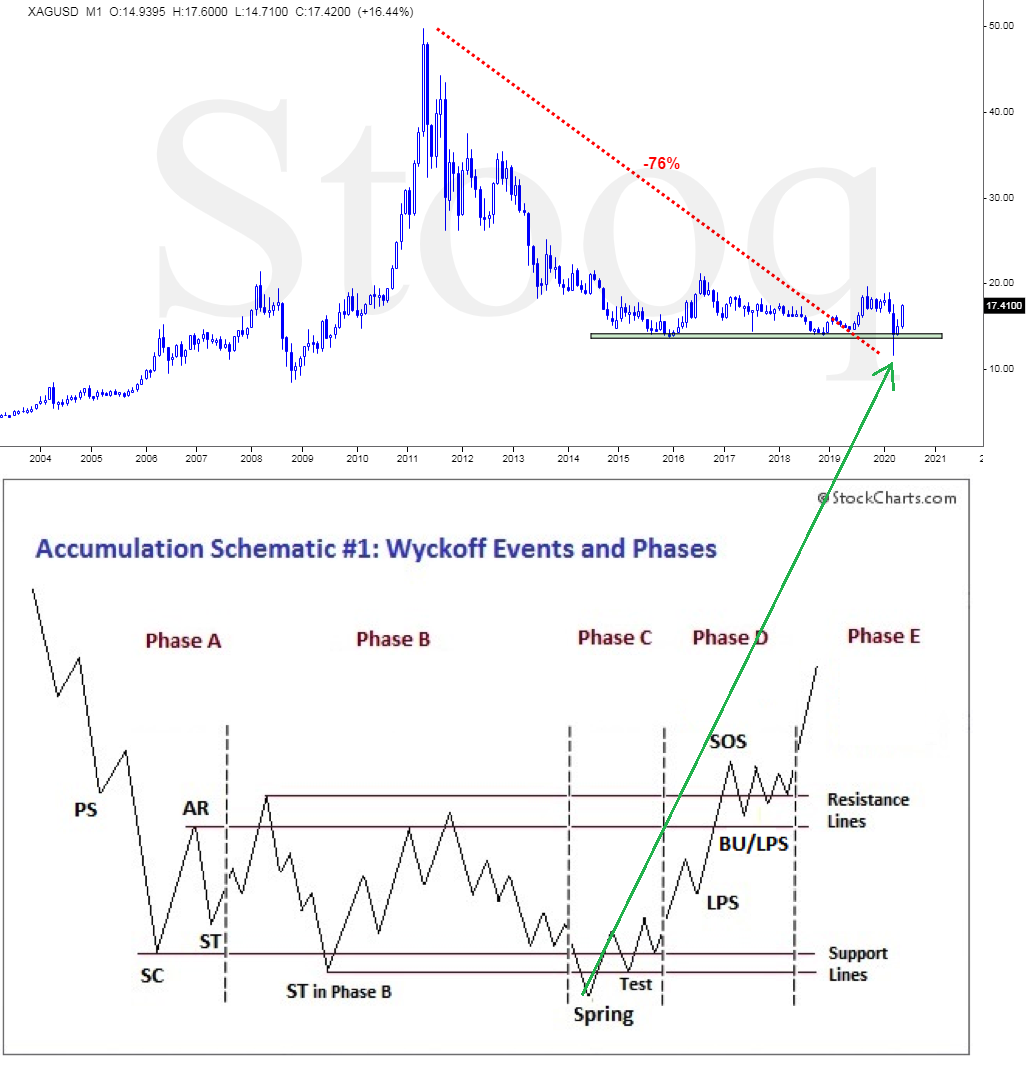 So it’s time to take a look at the silver chart from a longer perspective. From the high of 2011 to the recent low, the price fell by over 76%. It can, therefore, be assumed that the market is “cleaned”. The decline basically stopped already in 2016, and since then a horizontal trend has been built, which can also be determined by the accumulation phase. The recent breaking of the lows from recent years and a quick return (on the monthly candle only the bottom shadow violation) was a classic bull trap. Who had localized SL’s under lows (very clear, horizontal support) was thrown out of the market. This situation is similar to Wyckoff’s accumulation model. It can, therefore, be assumed that we are currently in phase C on silver.

What is the short-term situation?

Currently, the market is after a few days of strong price movement, so buying now is far above average risk. The area of $ 16.50 / ozt can be noticed, where you will find horizontal support, above which the bulls have returned in recent days. Now, the withdrawal should be of interest to buyers. It remains an open question whether we will go back there from current levels or whether the market will maintain dynamics, in one move we will be in the area of $ 18.70 / ozt and only from these areas will a larger correction be initiated, giving the opportunity to enter the market at a better price at risk attitude. However, given the long-term prospects of the silver, the correction should be used to build/increase the exposure.